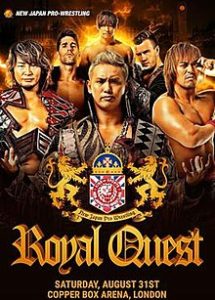 Video
New Japan is catching fire all around the world, and tonight, London will smolder as multiple titles are put on the line.

Result: Sho pins Ren Narita after a powerbomb into a lung blower
Time: 8:18

Match Thoughts
This was a fun opening match. The crowd was very loud and obviously excited for New Japan, and they cheered everyone and everything. Rocky and Raguchi stood out in the match, but everyone put on a good show.

Match Thoughts
Good match. Ibushi and Juice started strong, but Takahashi helped lead Hikuleo to a decent showing in the middle of the match. Juice was able to get the momentum back for his team though, and Ibushi rolled over Hikuleo by the end of the match. This was fun, even if it did feel like an exhibition for Juice and Ibushi.

Result: Will Ospreay pins Taiji Ishimori after a double-team Spanish fly from the top rope
Time: 10:49

Match Thoughts
Very good match. Once Eagles and Ospreay got rolling, the were a lot of fun to watch. ELP and Ishimori did their best to shut the Chaos team down, and they did pretty well at times, but Ospreay and Eagles flew around the ring with ease tonight. This was fun.

Ring Area
After the match, WIll Ospreay challenges ELP and Ishimori to an IWGP Jr. Tag Title Match. ELP just wants to leave.

Match Thoughts
Good match. Naito took his sweet time removing his entrance gear before the match, then he played it trnquilo against White. Naito would pretty much stay paired with White throughout the match, and SANADA and Owens had a lot of interactions as well. This had a fun back-and-forth to it, though I was fairly certain who I knew was going to take the fall tonight.

Ring Area
After the match, Jay White attacks both SANADA and Naito. White follows up by using a chair on SANADA, but by that time Naito has recovered enough to fight back. Naito hits White with Destino then sits down in the middle of the ring.

Match Thoughts
Very good match. The crowd was extremely hyped for Aussie Open, and the dueling chants were pretty much non-stop. Kyle Fletcher got isolated early, and he took a massive beating from both Tama Tonga and Tanga Loa. Jado also made his presence felt, so Aussie Open were in trouble. When Mark Davis got a tag though, the match opened up considerably. Aussie Open had GOD on the defensive for a while, and the match got quite interesting as it neared its end.

Result: KENTA wins via pinfall after Go To Sleep
Time: 20:16

Match Thoughts
Good match. This was very hard-hitting, and I think KENTA might have gotten more than he was prepared for from Ishii. The match was going well, and both men were laying in some heavy shots, but about halfway through the match KENTA looked like he nearly got knocked out. KENTA struggled from that moment on and you could see Ishii buying time and helping KENTA get through the rest of the match. KENTA also had some help from the Guerrillas of Destiny. All of this really got me to pull against KENTA, so the finish of the match worked extremely well in that regard.

Match Thoughts
Great match. This was the rubber match for Tanahashi and Sabre (each having won three matches in singles competition against each other). Sabre came into the match confident and arrogant as ever, and he toyed with Tanahashi early. Tanahashi surprised Sabre with a few holds and some escapes, but overall as the match went on Sabre was dominant down on the match. Tanahashi was resilient though, and he made some strong pushes late in the match to bring this title defense to a fun and exciting finish.

Result: Kazuchika Okada wins via pinfall after the Rainmaker
Time: 33:54

Match Thoughts
Great match! The crowd was pumped for this match, and they were often behind Suzuki. That helped elevate an already exciting match to make it something special. It seemed like Okada felt like he had something to prove against Suzuki, and the champ repeatedly stood in the middle of the ring and absorbed strike after strike. Suzuki almost always got the better of these striking sessions, but Okada persevered. Okada had to find moments to hit his biggest moves, because Suzuki was methodical and relentless. If Suzuki had a weakness in the match, it was in taking too much pleasure beating on Okada.

Ring Area
After the match, Okada asks the crowd if they enjoyed the show tonight. They did. As he goes on, SANADA comes out and heads to the ring. SANADA says that the next time he sees the people in London, he will be the IWGP Heavyweight Champion.

Show Impressions
This was a fun show. The undercard was good, and the final few matches were very entertaining. The main event ultimately felt like a consolation prize for Suzuki for not being in the G1 Climax, but it was still a great match and a memorable title defense.

Match of the Night
Suzuki vs Okada
Very fun. I feel like Suzuki won on points though.