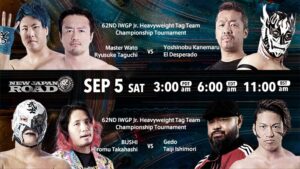 Result: Satoshi Kojima wins via pinfall after a lariat
Time: 6:49

Match Thoughts
This was a fun opener. Tsuji continues to look good (and I particularly like his dropkick and big splash), but I think Kojima might have killed him with a lariat tonight.

Match Thoughts
This was great. It started with Toru Yano apparently brimming with confidence after his KOPW 2020 win at Jingu Stadium. Yano had a lot of words for Tomohiro Ishii, and he even took off a turnbuckle pad while Ishii just stood there and watched with no expression on his face. Yano then took on Ishii face to face, but of course that didn’t work out so well for him so Yano quickly tagged out. There was a good amount of levity like that in the early parts of the match, then the action picked up considerably as the match went on. It was a great transition from funny to serious, and this was a great preview for the NEVER Openweight 6-Man Title match coming up soon on New Japan Road.

Match Thoughts
Very good match. Now that it seems like Ibushi and Tanahashi are done chasing the tag titles, there were no clear matches to build towards in this match. Rivalries certainly exist between these teams (Taichi and Sabre versus Tanahashi and Bushi, Suzuki and Nagata), and those rivalries helped add some emotion when those guys faced each other, but for the most part everyone faced everyone evenly. That led to a nice, evenly fought match that had everyone looking good by the end. Yes, even Douki.

Match Thoughts
Great match. Wato wanted to start the match, and even though Taguchi didn’t look too thrilled about that, Taguchi got on the apron and let Mater Wato fight first. Wato did well, but it wasn’t too long before Desperado and Kanemaru overwhelmed him with some good teamwork. Taguchi reset the match with a hot tag and a lot of hip-attack psychology, but Wato started to struggle again after a while. Wato finally started to shine when he and Taguchi were able to work together in the later stages of the match. This match had a nice build to it, and I enjoyed the final few minutes a whole lot.

Match Thoughts
Great match. I was a little skeptical of Bullet Club’s chances since Gedo often takes the fall in tag matches (unless Jado is in the match as well), but Gedo and Ishimori looked really good tonight. Bullet Club did a nice job of beating up Hiromu early in the match, though Hiromu might have been a bit too eager to fight Ishimori which left him open to double-team attacks. BUSHI was the calming force for LIJ throughout a lot of the match, and he held things together until Hiromu could get his own head together and start working as a team. From that point, LIJ looked great, though Bullet Club was still getting in a lot of good moves. The match was even pretty much until the final minute or so, and the excitement built up nicely.

Show Impressions
This was fun. Now that Summer Struggle is over and we’re headed into the G1 Climax, this show felt fresh. I’d gotten used to seeing certain people almost always facing the same people throughout Summer Struggle, but this show mixed a lot of people up (though not all of them). That’s good, and it got me excited for the short New Japan Road tour and the Jr. Heavyweight Tag Title Tournament. It’s a shame the tournament is so small, but it’s understandable considering the limited roster due to the pandemic. The matches will still be fun regardless of how many teams are in the tag league though.

Match of the Night
BUSHI & Hiromu Takahashi vs Gedo & Taiji Ishimori
The eight-man tag match was probably my second favorite of the night, but the main event really picked up as it went along.