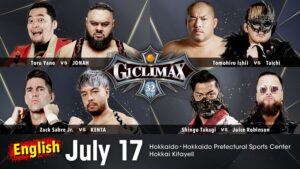 Match Thoughts
This was a nice opener. IT was an interesting tag match because it didn’t really preview any upcoming G1 tournament match, at least, not in the way they usually do it. Isaacs isn’t in the tournament, and Lawlor is in a different block than Finlay and YOSHI-HASHI. Finlay and YOSHI-HASHI are in the same block though, so I guess the only preview here was seeing which of those two teammates performed better. For me, Finlay performed way better than YOSHI-HASHI. Finlay was very aggressive, and for much of the match he took on both opponents essentially by himself.

Match Thoughts
This was fun. The opening minutes of the match had TAKA and ELP pair off and tease a test of strength that never happened. Archer got tired of nothing happening, so he got in and had a test of strength with Bad Luck Fale. Then Archer and Fale both attacked their smaller opponent at ringside, opening the match up. The pairings were kept up throughout most of the match, and overall this was a light and fun match.

Match Thoughts
Good match. This was one of those matches where everyone shared time in the ring and got their stuff in, but nobody really stood out as being the main focus of the action. House of Torture of course tried to cheat a lot, but the United Empire mostly did a good job of turning the cheating back around on them. The United Empire was definitely the more powerful team tonight, but the match was fought pretty evenly regardless.

Match Thoughts
Pretty good match. Tama Tonga still has a lot of anger after being kicked out of Bullet Club, but that anger didn’t really come out much tonight. They’re definitely saving it for when Tama faces Jay White later in the tournament, but tonight wasn’t much of a preview for that. It was a fine match, but it was also rather forgettable in the context of the G1 tournament.

Match Thoughts
Good match. The match started with Naito and Goto, and Naito continued to focus on Goto’s arm like he did yesterday. They have a tournament match coming up, and I really enjoy seeing someone begin their plan early like this. SANADA and Okada also paired off, and SANADA continued to struggle a bit after his opening-round loss yesterday. He didn’t look bad, Okada just looked better. The final pair was Tanahashi and BUSHI, and Tanahashi had no real issues. This was a good, straightforward match, even if it did feel a bit short.

Match Thoughts
Great match. Taichi versus Ishii is such a good, underrated rivalry. Ishii brings out the best in Taichi, and it’s always a hard-fought battle. Ishii started before the opening bell, slapping Taichi in the face and calling to the center of the ring. Taichi responded with a strike early in the match that surprisingly sent Ishii to the mat. Ishii responded in kind shortly after, and the rest of the match was a back-and-forth bout filled with strikes from Ishii and kicks from Taichi.

Result: Toru Yano wins via count out (after hitting both Jonah and Bad Dude Tito with a double low-blow)
Time: 9:01

Match Thoughts
This was fun, though it wasn’t as much as a Toru Yano match as I expected. What I mean by that is that Yano was barely able to get up to any shenanigans because he was too busy running away from Jonah. Jonah took the fight to Yano throughout the match, and the few attempts at cheating (shirt over the head, turnbuckle pad stuff, etc.) didn’t last long. Yano showed toughness and strength late in the match with some good wrestling moves on his much bigger opponent and a kick-out from a rough-looking senton, but in the final few minutes you could see the end coming. Jonah apparently needed to watch more video on Yano, because Jonah willingly ventured out to ringside a little too far.

Match Thoughts
Great match! KENTA and ZSJ both felt like they had something to prove here tonight, and that greatly affected how each of them fought. A lot of this match was about respect (or rather, the disrespect they both show towards each other), so a good chunk of the earlier parts of the match had both men willingly trading strikes and kicks. KENTA tended to get the better of striking battles, but ZSJ eventually started baiting KENTA in those exchanges as a way to get the move he really wanted. ZSJ had the better game plan tonight, going after KENTA’s weaker left arm. ZSJ had to absorb a lot of strikes, more than a few of which put him down to the mat, but submissions helped carry ZSJ through the later parts of the match (as did poor decisions from KENTA to not pin ZSJ on two separate occasions).

Match Thoughts
Very good match. Juice started the match with an attack before the bell, and he dominated the first few minutes of the match. Much of the fighting took place at ringside during the first part of the match, and eventually Takagi starting fighting back. Juice repeatedly took shortcuts throughout the match, but he also stood up and traded strikes with Shingo as the match went on. Juice had something to prove, and for the most part I think he succeeded. The finish was just okay, but everything up to that point was very good.

Show Impressions
This was another really good show. I think yesterday’s show was a bit better overall in regards to the tournament matches, but tonight’s show felt like it had better pacing.

Match of the Night
Zack Sabre Jr. vs KENTA
Technical and hard-hitting. This was great.