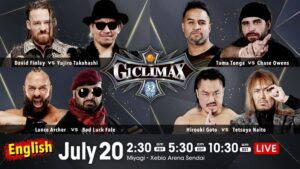 Match Thoughts
This was a very good opener. Lawlor and JONAH are both in A Block, but they mostly stayed apart during the match. The pace was high though, and both teams worked well together. It was a very fun way to start the show.

Match Thoughts
Pretty good match. Yano started off surprisingly strong by taking the fight to Okada. Yano cheated, of course, with chairs and exposed turnbuckles, but it wasn’t his usual trickery. Yano was fighting like a bad guy. Okada eventually took over, but it was still interesting to see, and it might be a good preview of their upcoming tournament match. YOSHI-HASHI then dominated Oiwa.

Match Thoughts
Very good match. Bullet Club focused on Tanahashi in the early part of the match, essentially triple-teaming the Ace. The match broke down a little towards the middle, then Fujita and KENTA closed it out with an extended segment against each other. Fujita looked really good tonight. KENTA was never really in danger, but it did take a while for him to put the tenacious young lion away.

Match Thoughts
Very good match. SANADA and Taichi started the match with pec-flex contest (which SANADA won), but ZSJ and Shingo actually got the match started with a quick, technical exchange. THe pace was high in this one, and TAKA ended up facing SANADA in the final segment. TAKA looked really good and had a bunch of nice counters, but it was pretty clear from the beginning who would be taking the fall tonight.

Result: Yujiro Takahashi wins via pinfall after Big Juice (and a strike with a wrench from SHO at ringside to FInaly’s head)
Time: 12:59

Match Thoughts
Pretty good match. Finlay was aggressive and looked good throughout the match, but Takahashi needed help (as usual). SHO appeared at ringside partway through the match, and he helped out with distractions and illegal strikes on multiple occasions. Finlay came close to beating what was essentially a two-on-one, but he needed some backup of his own tonight.

Match Thoughts
Very good match. This was better than I expected, especially the later sections of the match. It didn’t feel quite as heated as I thought it might considering Tama is still angry about nearly everyone in Bullet Club turning on him, but there was still a decent fight here. Owens took the initiative and superkicked Jado early in the match, but then Owens forgot all about Jado. Jado helped keep Owens from cheating in the final stages of the match, and that forced Owens to face Tama in the ring. There were a few really nice sequences of counters late in the match, and I particularly enjoyed the buildup to the finish.

Match Thoughts
This was okay. Archer looked strong, so Bad Luck Fale had to attempt cheating a lot. The best part of the match was probably Red Shoes Unno shutting down Fale’s cheating attempts twice in a row at ringside. Fale eventually managed to powerbomb Archer through two chairs at ringside, but the match kept going. I didn’t care for the finish which, and that hurt an already just-okay match. I’m looking forward to seeing Archer face some of his smaller opponents in the block.

Match Thoughts
Great match. Naito completely dominated Goto in the first half of the match, but Goto slowly built up to a comeback in the second half. This whole match had a great build to it with the final few minutes being particularly hard-hitting. There were quite a few counters as both guys looked for their signature and finishing moves late in the match. This was easily the best match of the night.

Show Impressions
Overall this show was quite a drop from the previous two nights. The undercard was about the same as it’s been, but the tournament matches didn’t deliver nearly as much. The main event did save the night though.

Match of the Night
Tetsuya Naito vs Hirooki Goto
Both guys might have better matches in the tournament, but this was still highly entertaining.