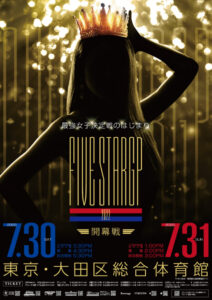 Match Thoughts
This was a fun opener. The matchups certainly got better as the match went on, with each successive fall being a little better than the previous one. A standout moment for me were Hanan and Koguma attacking Natsupoi and Tam Nakano on the stage while the Cosmic Angels were doing their pre-match dance routine. I also quite enjoyed the final fall. Natsupoi stood out as probably the best fighter in the match, mostly because she did a lot of the work for her team in the final two falls.

Video
For the first day of this year’s tournament, we get a brief look at all of the competitors in the 5 Star GP 2022.

Video
After everyone leaves the stage, we see the matchups for tonight’s show on the video screen.

Match Thoughts
Good match. Mai Sakurai was the stronger fighter from the start, though Momo Kohgo did put up a decent fight. Sakurai made a few careless mistakes that Kohgo capitalized on, but Sakurai always recovered quickly. A tough start for Kohgo, but an entertaining match.

Match Thoughts
Very good match. Ami Sourei has a significant size advantage on Saya Iida, but Iida wanted to test Sourei’s power early in the match. They started with strikes and were fairly evenly matched, but Iida wisely moved on to takedowns and holds. Iida, was making good progress, but Sourei’s power became a huge problem for Iida late in the match.

Match Thoughts
Good match. SAKI wanted to start the match with a friendly handshake, but Unagi Sayaka was more interested in messing with SAKI. Sayaka refused to shake hands before the match, then, with a smug smile, she offered her hand to SAKI during the match. SAKI didn’t fall for it, and she attacked Sayaka. And that’s kind of how the match went. Sayaka seemed to think she was the stronger and smarter of the two, but SAKI kept getting the better of her. This was a nice fight with great energy.

Match Thoughts
Very good match. This was a battle of power versus power. Risa Sera started strong, and she dominated the first part of the match. Maika started mounting a comeback with heavy strikes that staggered Sera. Sera then decided she wanted to exchange strikes, and the two of them did so a few times throughout the match. By the end, both women were trying to hit their hardest strike, but neither would stay down. It took a rather brutal combination to end this fight.

Match Thoughts
Very good match. AZM started quickly by dropkicking Syuri before the opening bell. AZM kept the pressure on, taking the fight to the outside and hitting a diving double-stomp onto Syuri on the floor. AZM kept attacking quickly inside the ring, but Syuri finally started to fight back. As AZM took damage, she slowed down, allowing Syuri to attack even more. AZM still hit bursts of offense, but Syuri’s kicks and counters dealt a lot of damage to the High Speed Champ. This was a fast (the pace, not the time) and fun match.

Ring Area
After the match, Nanae Takahashi gets on the mic and celebrates the renewed team of 7KAIRI (Nanae Takahashi and Kairi). Referring to Lady C and Kamitani, Takahashi wonders if this is what Stardom has become (“a tall girl, and a girl that can jump”). She says you can’t wrestle without passion.

Takahashi calls out Syuri, and Syuri comes to the ring. As the first World of Stardom Champion, Nanae Takahashi says she laid the foundation for the title. Syuri wouldn’t even be champ right now if not for Takahashi and her role in the formation of Stardom. Takahashi suggests a fight with the champ. Syuri says she’s wanted to fight Nanae Takahashi, but she doesn’t agree with Takahashi about Stardom’s lack of passion. Syuri vows to show Takahashi the strength of the current Stardom. Takahashi attacks Syuri, but Ami Sourei runs in and stops the attack. Takahashi fights back sending Sourei from the ring. Takahashi has the last word, saying she’ looking forward to fighting Syuri.

Kairi then takes the mic. Addressing Saya Kamitani and her accusations that Kairi is “running too far ahead,” Kairi says she is focusing on the here and now. Kairi says the Wonder of Stardom title is calling her name, and she asks Kamitani to accept her challenge for a title match. Kamitani feels like she is still an immature champion, but she’s trying to do her best. Kamitani pointsout that she’s defended the Wonder of Stardom title eight times… the same number of times Kairi defended the title when she had it. Kamitani says she will defeat Kairi and surpass her reign as champion.

Match Thoughts
Very good match. MIRAI starting building up some good offense early in the match, and she never backed down. Mayu Iwatani went into a defensive mode early, and she struggled to recover from the increasingly brutal attacks from MIRAI. Iwatani had a particularly bad spill a few minutes into the match where she went for a suicide dive between the ropes and completely missed MIRAI. Iwatani landed hard on her back, and she never really recovered. Iwatani got in a good number of strong attacks, but MIRAI was relentless and hit really, really hard. This was a rough night for Iwatani.

Match Thoughts
Very good match. This was another power versus power match. Himeka and Utami both had pretty much the same idea for the fight: hit hard and get some big slams. Most of the match was fought in the center of the ring with both wrestlers going back and forth with the advantage. Combination became super important late in the match, and pairing strikes with slams worked well for both.

Match Thoughts
Great match. Giulia was confident going into this, but Hazuki was very aggressive right from the start. Giulia did get the first big advantage though. The fight went to ringside early, and it ended up on the stage. Giulia did a running dropkick (off of the referee’s back) on the stage, but it kind of backfired on her since she landed hard on the wood of the stage floor. In pain, Giulia then took a move from Hazuki that sent Giulia tumbling down the stage steps. Back in the ring, Hazuki kept pressing the attack. Hazuki hit big movie after big movie, and Giulia struggled to move from defense to offense. In the end, Hazuki simply got more highly impactful moves than Giulia did.

Show Impressions
This was a great opening day for the 5 Star GP. None of the matches felt like afterthoughts, and the matches I was looking most forward to were all entertaining. It felt like there were a lot of upsets tonight. That isn’t good or bad, it’s just interesting.

Match of the Night
Giulia vs Hazuki
This is a tough call because there were a lot of good matches in different styles, but the main event was a nice combination of spectacle, energy, and wrestling.