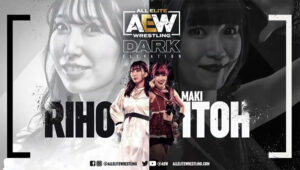 Match Thoughts
Very good match. Both guys are very agile and can fly, and that’s the type of action we got here. There was a bit of back and forth, but Danny Limelight began to take over later in the match. Jungle Boy survived some high impact moves in and around the ring on his way to a nice comeback. Jungle Boy seemed a bit more in-control and sure about what he was doing throughout the match, but both guys looked good.

Match Thoughts
Squash. Miro watched as Sabian beat up Morales for a while. Sabian tried to tag out once, but Miro wanted Sabian to beat up Morales some more. Miro then came in and rampaged for a minute, then Sabian tagged back in and finished the match. Baron Black never tagged in.

Match Thoughts
Good match. Skyler Moore looked pretty good in this losing effort to Big Swole who is is on her way to climbing back up the rankings in the women’s division. Swole looked confident tonight.

Video
A commercial for the AEW Casino mobile game.

Match Thoughts
Good match. QT Marshall played around with Stunt for a while, but that allowed Stunt to hit Marshall with some great high-risk moves. Despite Stunt’s good showing, Marshall repeatedly took advantage of their size difference to hit Stunt with a series of brutal-looking moves. Similar to how he’s done before, Stunt was used to make put over the jerkiness on an opponent.

Video
A look at Lee Johnson. He talks about his first win on AEW Dynamite as well as being part of AEW and the Nightmare Family.

Match Thoughts
Good match. The Sydal brothers started off well, but Mike Sydal got isolated and dominated by Jorel and Isaacs. After a while, Matt tagged in and shifted the momentum of the match solidly into the favor of the Sydals. I think the Sydals could use a little momentum, and this was a pretty good step towards building some.

Backstage
Alex Marvez welcomes Powerhouse Hobbs and Hook. Hobbs doesn’t play games, and tonight is all about that action.

Match Thoughts
Pretty good match. Both women looked good, and there was some nice back-and-forth action.

Backstage
Alex Marvez asks Matt and Mike Sydal what’s next, but Kenny Omega (with Don Callis and Michael Nakazawa) interrupts them. Omega says he’s here to scout for a possible future title contender. Matt Sydal says he’d love to climb the rankings and face Omega. Omega dismisses Tony Khan’s rankings in favor of his own. Omega’s ranking consist of Michael Nakazawa in all five top spots. Omega tells Matt Sydal that if he can beat Nakazawa right now, then he’ll get a shot at the champ. Matt loves that idea.

Match Thoughts
Very good match. Max Caster is growing on me, and Dante Martin is steadily gaining experience. This was a fun match with Caster using power and dirty tactics to dominate for a while, then Martin fighting back with high-risk and high-flying moves. This was a nice match for both guys.

Result: Abadon wins via pinfall after the Cemetery Drive
Time: 3:23

Match Thoughts
Squash. Ray Lyn was too scared to really do anything, so Abadon took her time destroying her.

Match Thoughts
Good match. Cutler was smart and tried to keep Hobbs off-balance with a quick attack, but the moment Cutler slowed down, Hobbs took over. Cutler couldn’t deal with Hobbs’ power, and that led to a quick and definitive finish.

Video
A commercial for Wrestling with the Week, Scorpio Sky and James Willem’s podcast.

Match Thoughts
This was really just a showcase for Matt Hardy’s team to show what they can do prior to the big 10-Man tag match coming up on Dynamite. It was fun though.

Video
Coming this April, AEW Outside the Ring hosted by Lexy Nair.

Match Thoughts
This was silly and short. Nakazawa had his pants pulled down at one point, and Sydal didn’t have much trouble despite already wrestling tonight.

Ring Area
After the match, Kenny Omega runs out and attacks Matt Sydal. Omega says he doesn’t want to wait until Dynamite to give Matt give match. Why not have it right now? The bell never rings, but Omega hits Sydal with the One-Winged Angel and forces Rick Knox to make a three count.

Tony Khan comes out to the stage, and he’s not happy. He says what Omega just did is crap, and he says Omega doesn’t make matches anyway. Khan says that Matt Sydal will get a one on one match against Omega on Dynamite in nine days, and if Sydal wins, he’ll get a future title shot. Omega is pissed and says he won’t do it, but Khan has already walked away.

Match Thoughts
Great match. This was super fun, and it was easily Maki Itoh’s most interesting and competitive match in AEW so far (at least since she’s been in the United States). Seeing Itoh in big tag brawls is a ton of fun, but tonight she had a solid strategy that largely worked against Riho. Itoh went after Riho’s lower back, setting the former AEW Women’s Champ up for multiple crab and half-crab variations. There was some lightness and comedy here and there, but mostly this as a competitive wrestling match. Riho did well to give as much as she took, and even though I expected Riho to win, there was still a good amount of tension with how the match played out. This was a great man event for the first AEW Dark: Elevation.

Show Impressions
As fun as some of these matches were, this really just felt like AEW Dark. Sure, the commentary team is different, but the show didn’t do much to differentiate itself from the Tuesday show. I think they should definitely do more segments like the Lee Johnson video package, exploring the background and motivation for some of the up and coming wrestlers. With a name like Elevation, I expect that’s where they’re headed, but tonight really just felt like another episode of Dark.

Match of the Night
Maki Itoh vs Riho
Super fun.