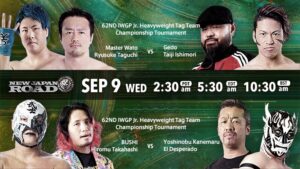 Result: Satoshi Kojima wins via pinfall after a lariat
Time: 7:34

Match Thoughts
Good match. These two wrestled in the opening match on September 5th, and this match felt very similar to that one. That’s not necessarily a bad thing though. Once again Tsuji was impressive when he got bursts of offense, but once again Kojima nearly took his head off with a lariat.

Match Thoughts
Very good match. These Chaos teams continue to be very aggressive and have very entertaining tag match. The big rivalry that everyone is centered around is SHO versus Tomohiro Ishii. Those two guys just want to fight each other, and winning the match seems to come secondary. When they get in the ring against each other, it’s great. Hopefully they’ll have a one on one match at some point after the NEVER Tag Title match. As teams, Goto’s team seems to have better teamwork. Okada’s team has some pretty goo teamwor here and there, but they mostly seem to have strong individual performances more than tandem offense. Both teams are a lot of fun to watch though, and I’m looking forward to the title match in a few days.

Match Thoughts
Good match. We’ve seen this match before as well, and ever though there was nothing new really added to it this time, I still enjoyed it. Ibushi against Taichi was probably my favorite part of the match, and I also enjoyed seeing Suzuki repeatedly frustrate Honma by slowly rolling out of the way of Kokeshi (Honma’s headbutt).

Video
The competitors for this year’s G1 Climax, the 30th G1 Climax, are announced.

Match Thoughts
Good match. Bullet Club did pretty well at first, but LIJ started to come together as a team when Dick Togo got tagged into the match. Togo didn’t stand a chance against LIJ working all together. This was fun.

Match Thoughts
Very good match. Master Wato spent most of the time legal for his team, so Taguchi was basically in a supporting role almost the entire time. Wato did very well, but Gedo and Ishimori are a lot to handle for anyone. Taguchi helped Wato bring the momentum back to his side a few times, but Ishimori looked great towards the end of the match. I particularly enjoyed Ishimori’s sequence of a roll-up into a crucifix pin into the Yes Lock into the Bone Lock. It was impressive.

Match Thoughts
Great match. LIJ had a very nice plan to start the match. BUSHI and Hiromu stalled and kept tagging out, and when El Desperado and Kanemaru got sufficiently frustrated, LIJ rushed in with a surprise attack on both Suzuki Gun members. Hiromu took El Desperado out to the floor, and BUSHI beat up kanemaru in the ring. That set up LIJ with a solid advantage to begin the match. The match would go on for a while though, and Suzuki Gun managed to regroup and work together well to gain advantages of their own throughout the fight. The match went back and forth, and the pace and intensity picked up as it went on. One key action was that El Desperado started to pull off BUSHI’s mask fairly early in the match. El Desperado didn’t succeed then, but BUSHI’s mask was never tied properly after that, and it became a source of tension seeing how loose his mask was. That become one of a few different factors that led to a very good finish to the match.

Show Impressions
This was a good show. We’d seen all the matches on the undercard before, but they were still fun again tonight. The two tournament matches made this show worth watching though. This was probably the most fun night for the mini Jr. Tag League tournament.

Match of the Night
Yoshinobu Kanemaru & El Desperado vs BUSHI & Hiromu Takahashi
With the way the Wato/Taguchi vs Bullet Club match went, I think the main event ended to only way it could have. There was a possibility for a three-way tie if Suzuki Gun lost in the main event, and that would have been too complicated for such a small tournament. Plus, this match builds up even more tension for the one on one match to determine the new Jr. heavyweight Tag Champs.