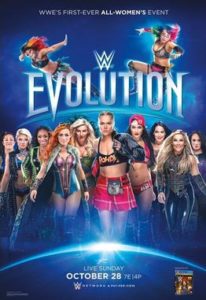 Video
Female superstars talk about what led up to Evolution and what it means to them.

Ring Area
Nita Strauss and Lizzy Hale open the show with a song.

Match Thoughts
Good match. Trish and Mickie definitely had the best match-up in this match. The crowd was super into them, and they worked well together. Everyone looked good, really, and this was a fun opening, crowd-pleasing match. No real surprises here.

Backstage
Kayla Braxton welcomes the Bella Twins. Nikki and Bella say tonight is about honoring the women’s evolution, and Nikki is dedicating her match tonight to Ronda Rousey’s mother.

Match Thoughts
This was a lot of fun. I kind of wanted a bigger surprise as far as the winner goes, but there were a lot moments that made me smile here. Ivory, Ember Moon, and Zelina Vega were standouts for me, and I really liked the moments in the middle of the match when Tamina and Nia Jax fought each other and everyone else.

Ring Area
Charly Caruso enters the ring and congratulates Nia Jax. Nia says she has her sights set on the RAW Women’s Title, but she doesn’t care who is the champ. They won’t be champ for long.

Video
Toni Storm and Io Shirai are both looking to fulfill their dreams by winning this year’s Mae Young Classic.

Match Thoughts
Great match! I was a little sad because I wanted both women to win, but I was thrilled with how this match turned out. I think Storm had a better tournament than Shirai, but this was easily one of the best matches in this year’s Mae Young Classic. Both women looked strong, Shirai hit her high-flying moves perfectly, and everything about this was great. I really enjoyed how it built up from extended sequences of grappling, to some power moves, to some flying, to some huge moves towards the end.

Ring Area
After the match, the winner of this year’s Mae Young Classic is presented with her trophy by Triple H, and he, Stephanie McMahon, and Sara Amato congratulate both women.

Match Thoughts
Very good match, but it also got to be very frustrating. The Riott Squad looked as good as I’ve ever seen them. They were tagging constantly and were a few steps ahead of their opponents for 95% of this match. I know WWE probably wanted to send people home happy, but man, I really want the Riott Squad to get a big win somewhere. The finish itself made sense, but for Riott Squad to be so good throughout the entire match and not come up with the win felt a little cheap. But, of course, I’m not complaining about the match itself, just the choice of the finish. Everything leading up to that was very, very good.

Result: Shayna Baszler wins via submission with the Kirifuda Clutch (and some distractions from Marina Shafir and Jassamyn Duke) and becomes a two-time NXT Women’s Champ
Time: 12:29

Match Thoughts
Great match. Baszler has improved immensely over the last year, and this was probably the best match Sane and Baszler have had against each other. There were some shenanigans towards the end of the match, and it worked well for what they were going for. If got me pretty hot.

As for the action leading up to the finish, it was great. Baszler picked apart Sane for a lot of the match, focusing her attack on Sane’s left arm. The moves and holds she put on Sane looked brutal, and it made me pull for Sane even more. Sane fought back though, and she used strikes and dives to believably put Baszler on the ropes. It was a close match, and they even revisited the finish of their last title match as the excitement was building towards the end of the bout.

Video
A look at the feud between Becky Lynch and Charlotte Flair.

Result: Becky Lynch wins when Charlotte can’t meet the ten count after a powerbomb from the ropes through a table on the floor
Time: 28:39

Match Thoughts
Great match. Both women took and dealt a beating. Weapons were used, tables were broken, and ladders were fallen off of. The emotion felt real throughout the match, and there were some really great moments. This was a great highlight of a great feud. The only bad part? It wasn’t the final match of the night.

Video
A look at the feud between Ronda Rousey and the Bellas.

Match Thoughts
Good match. Nikki dominated the first half of the match which was weird, but Brie helped so it sort of made sense. Once Rousey started to take over it was more entertaining. Ultimately, this match went about like I think most people expected. It was good, but I think Becky versus Charlotte was better. The SmackDown title should have closed the show.

Show Impressions
This was a good show. Other than the first and last matches being just good not great, every other match was very entertaining for one reason or another. I might have gotten a little emotional a few times throughout the night.

Match of the Night
Becky Lynch vs Charlotte
I think the emotion put this one over the top for me. The NXT title match was also great, and the Mae Young Finals might have been the best wrestling match of the night.