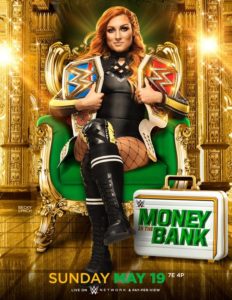 WWE Money in the Bank
#MITB

Video
A look at tonight’s matches.

Match Thoughts
This was a whole lot of fun. Naomi was a big standout early in the match. She did some really great things using and avoiding the various ladders in and around the ring. Nikki Cross also did a lot early in the match, and I really though she was going to win in a very quick way. As the match went on it got more and more exciting, and every woman had at least a moment or two where they shined. They did a really good job of making me very nervous as the match neared its finish. I also liked how this match probably established at least one or two feuds that don’t necessarily involve the briefcase. I liked this very much.

Ring Area
Charly Caruso enters the ring and congratulates the winner of the match.

Backstage
Sami Zayn asks Triple H where Shane McMahon is. Sami needs to talk to someone in power. Sami says Braun Strowman is going to be a problem tonight. Sami can’t get ready for his match tonight because he’s worrying about Strowman coming after him. Triple H says Strowman has been banned from the building. With all due respect, Sami asks for protection. Triple H suggests Sami tape up his fists and get out of his office.

Backstage
Rey Mysterio gets ready for his match and hugs his son Dominic.

Match 2
US Title Match
Rey Mysterio vs Samoa Joe (US Champ)
(referee: Shawn Bennett; watching in the back: Dominic)

Result: Rey Mysterio wins via pinfall after a hurricanrana
Time: 1:40

Match Thoughts
This was very short, and the finish was marred by a bad call. Was the call part of the story or did the ref just mess it up? I guess we’ll find out over the next few weeks. As for the match tonight, it was a receipt for Joe’s super quick win at Wrestlemania. I’d really like to see these guys have an actual match for the title at some point.

Ring Area
After the match, Dominic heads down to the ring. Rey and Dominic begin to leave together, but Samoa Joe attacks Rey. Joe takes Rey back into the ring and repeatedly slams him in front of Dominic. Joe leaves as Dominic checks on his father.

Result: Shane McMahon wins via escape over the top of the cage
Time: 13:09

Match Thoughts
This was fine. Shane tried to run, then he fell off the cage a few times. That’s about all I expected really. Miz was fine. He seemed really angry and tried to punish Shane, but Shane absorbed punishment while trying to find ways to get away. I’m just not into this feud, and I hope this ends it.

Backstage
Sami Zayn is found unconscious and hanging upside down. Will he be able to compete tonight?

Result: Tony Nese wins via pinfall after the Running Nese in the corner
Time: 9:23

Match Thoughts
Good match. This match probably would have been about twice as long had it been on 205 Live, but this was still a hard fought and entertaining match. Both men pushed hard and built up to a nice final few minutes where it looked like both men had realistic chances of winning. They even started winning the crowd over by the end of the match.

Video
A look at the feud between Lacey Evans and Becky Lynch.

Result: Becky Lynch wins via submission with Disarm Her
Time: 8:38

Match Thoughts
Good match. Despite not liking Evans very much, I thought she did pretty well here. Ultimately this felt like a bit of a story line segment for Becky’s other title match tonight, but as a title defense, it was good.

Result: Charlotte Flair wins via pinfall after a big boot (and a Woman’s Right from Lacey Evans)
Time: 6:12

Match Thoughts
This was pretty good, but the finish could have been better. The finish of the match was just frustrating. It was supposed to be that way to a certain extent, but the circumstances just made it aggravating. Up to the final few minutes though, I like the match. It was heavy on the story rather than the action, but the action supported the story in a good way.

Ring Area
After the match, Becky Lynch attacks Lacey Evans at ringside. Charlotte joins in, attacking Becky. Lacey and Charlotte beat up Becky until Bayley runs down to break things up. Bayley quickly gets taken down. Charlotte attacks Becky again, then she celebrates. That gives Bayley time to recover, and Bayley throws Charlotte into the ring post.

With Charlotte down, Bayley thinks about what to do. She cashes in.

Match Thoughts
Yeah, this was exciting. I kind of wanted Bayley to cash in on Becky, but this is good too.

Ring Area
Elias heads to the ring. He takes a seat and begins to play his guitar. He sings a song about how terrible Hartford is and how no one wants to hear Roman Reigns talk. After his song, Elias heads up the ramp to leave. As he gets to the stage, he gets a Superman punch from Roman Reigns.

Result: Roman Reigns wins via pinfall after a spear
Time: 0:10

Match Thoughts
A one move match. Unsurprising, but an alright and expected end to the segment.

Match Thoughts
Great match! Rollins and Styles threw everything at each other tonight. The pace was high right from the start, and it never really let up for the entirety of this nearly twenty minute match. Great counters, great sequences, and a great sense of awareness from both guys. It felt like they’d been wrestling each other for months. They seemed to know each other that well. They were having to pull out different ways to get to their moves, and they were modifying moves just to try to get an advantage. If this is what the Universal Title is going to become now that it’s off of Lesnar, then I’m going to like it very much.

Backstage
Charly Caruso welcomes Xavier Woods and Kofi Kingston. Kofi says Owens isn’t wrong when he says he wouldn’t be champ without New Day. Woods tells Kofi that he’s deserved to be champ for eleven years. Kofi says he’s going to prove that no one can go through his brothers to get to the WWE Title.

Match Thoughts
Very good match. I got nervous a few times throughout this match. I like both guys, but I don’t know if I’ll ever pull against Kofi. Owens brought the fight to Kofi and was very smart about his plan of attack. Kofi was all heart, fighting back even when Owens did his best to hurt the champ. Both men hit big moves towards the end of the match, and both men were frustrated by not being able to put their opponent away. I really enjoyed this.

Ring Area
After the match, Xavier Woods runs down to the ring to join Kofi.

Match Thoughts
This was a great Money in the Bank match, but the finish makes no sense. It’s not just frustrating, it’s kind of dumb. They could have done that finish a different way.

Other than the finish, I very much enjoyed this match. There were some really scary moments, and I’m a little concerned for Finn Balor’s back, but this was super fun to watch. Rarely have I been so conflicted about a match.

Show Impressions
There were a lot of shenanigans tonight and a lot of story overshadowing matches, but I did enjoy the show. There were at least a few really good wrestling matches, and that’s about all I can hope for from a WWE PPV these days.

Match of the Night
Seth Rollins vs AJ Styles
I think I’m most likely to watch this match again. This was the best pure wrestling match of the night.