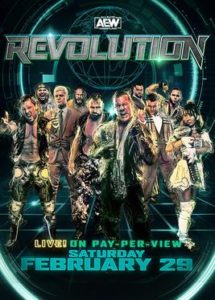 << Read the Recap & Review for the AEW Revolution Buy-In! <<

Match Thoughts
Very good match. It was nice finally seeing Hager compete in an AEW ring. This was an entertaining grudge match with Dustin being fired up for revenge. Hager didn’t seem too worried when the match started, but Dustin’s tenacity made Hager take him seriously. I really enjoyed the fact that Dustin utilized a cross arm breaker (since Hager broke Dustin’s arm months ago to start this feud). Hager looked very strong tonight though, and I’m looking forward to seeing where he goes from here.

Match Thoughts
Great match! Allin and Guevara both stepped up their game tonight. Most of the fighting actually took place before the opening bell, with both men brawling at ringside and taking dives at each other. There was already some brutality, and the match hadn’t even officially begun yet.

They really had me wondering if the match would take place at all after a particularly breathtaking dive from Guevara. The match did start though, and the intensity just continued to build. The match itself was short, but it was so energetic (and at times a little scary) that it really couldn’t have lasted too long. Allin had the crowd out of their seats, and Guevara showed how great and selfless he is in this great grudge match!

Video
A look at the fractures in The Elite between Adam Page, Kenny Omega, and The Young Bucks.

Match Thoughts
What a fantastic match. The drama felt real, and the action, phenomenal as it already was, supported the intense drama with every single move.

Going in to the match, each man had a bit of a different approach to the feud. Adam Page had been feeling overlooked and undervalued. He felt like an outsider from The Elite, and actively tried to distance himself from the group. Kenny Omega wanted everyone to just get along, but he was being pulled in two directions between his partnership with Page and his deep friendship with the Young Bucks. Nick Jackson also wanted everyone to get along, but he didn’t understand or appreciate how Page had been acting. And Matt was just angry.

The tension between the four men was already high by the time the opening bell rant, and it wasn’t long before everything exploded. Early in the match, Page spit in Matt Jackson’s face, so the Bucks took their aggression out on both Page and Omega. That opened the match up from friendly competition to an all-out war. Page and Matt were looking to hurt someone. Omega and Nick were still trying to focus on getting the win, but they got drawn into the anger flowing throughout the match as well. It all combined to produce an amazing match with some of the best drama I’ve seen in a long time.

Years ago, I used to give the Bucks crap for they way they overreacted with their actions and facial expressions, but tonight (and in the past few years really), they were telling a compelling story with their reactions. So were Omega and Page. This felt like a payoff to years of real-life and in-character story lines. There were even nods to the past like Page hitting some of Marty Scurll’s signature moves, The Bucks hitting the Golden Trigger (the finisher of the Golden Lovers) on Omega, and even the history of Matt Jackson’s back problems that go way back to The Elite’s time in NJPW. I loved this match.

Ring Area
After the match, The Young Bucks attempt to leave on good terms with Omega and Page. Omega stands with the Bucks, but Page won’t accept their offer of friendship. Page leaves the ring but hangs out on the apron. The Bucks leave the ring, and we see Page grab on to the top rope while staring at Omega’s back. A Buckshot Lariat doesn’t come though. When Omega turns around, Page opens the ropes for Omega. Page and Omega leave together.

Video
A look at how Kris Statlander and Nyla Rose came together for their upcoming title match.

Match Thoughts
Good match. They had a tough spot following the tag title match, but Rose and Statlander delivered a good women’s title match. This was a battle of power versus power, and I liked it. It got a little ugly at times, but I think it worked to put over the struggles both women had to endure to lift and slam their opponent.

Video
A look at the feud between Cody and MJF.

Ring Area
MJF heads to the ring with Wardlow for his grudge match with Cody. Cody comes out next, and he is played to the ring live by Downstait. Coming out to see Cody to the ring are Brandi Rhodes, Dustin Rhodes, Arn Anderson, QT Marshall, Stephen Amell, and some other honorary members of the Nightmare Family.

Result: MJF wins via pinfall after a punch with the Dynamite Diamond Ring
Time: 24:38

Match Thoughts
Very good match. I still don’t think MJF is a very good heel, but he did well in this match tonight. Cody came to the ring with tons of adrenaline, but MJF immediately sucked the life out of the match by leaving the ring. MJF kept stalling and cheating, but eventually Cody did start to mount some offense. It looked like Cody was headed towards getting some satisfying revenge, but MJF hit some expected (though well-done) shenanigans to capitalize when Cody let his emotions get the better of him. I feel like this will be another big chapter in Cody’s frustrating path in AEW so far. Whenever Cody does make it to the top it will be that much more fulfilling for everyone.

Result: Pac wins via submission with the Brutalizer
Time: 13:01

Match Thoughts
Great match. Orange Cassidy actually tried. Cassidy controlled the pace of the match, alternating between trying to frustrate Pac with his sloth style and trying to overwhelm Pac with his speed. That made for a super fun match where I couldn’t really predict what was going to happen next. Chuck and Trent mostly stayed out of the way, but when they did attempt to help Cassidy late in the match, the Lucha Brothers ran out to brawl with the Best Friends. That left Pac and Cassidy alone, but I still wasn’t sure who was going to win. I really enjoyed the finish, and I really enjoyed this whole match.

Video
A look at the feud between Jon Moxley and Chris Jericho.

Match Thoughts
Great match. It started with a brawl through the crowd, then back in the ring it became a struggle for Moxley to overcome Jericho and everyone else in the Inner Circle. At times Jericho seemed like he wouldn’t mind being disqualified, and at other times he seemed like an evil mastermind orchestrating distractions and cheap shots. Moxley just had to fight, brawl, and survive. Moxley had some tricks of his own though, and that led to a fun and satisfying finish to a very nice main event World Title match.

Show Impressions
This was a great show. I though it might have peaked early with the Guevara/Allin match and the tag title match, but the rest of the show was really good too. I can’t wait to see what happens next now that many of these long-term story lines have apparently been paid off.

Match of the Night
Young Bucks vs Adam Page & Kenny Omega
This is probably one of my favorite matches ever. It’s up there somewhere.