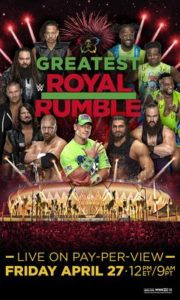 Video
All of tonight’s matches are briefly previewed in the show’s opening video.

Match Thoughts
Good match. There weren’t any surprises here, but it was a very solid match. I think this was more about history than anything else. The history between these two men, and the history of this match being the first of the Greatest Royal Rumble in Saudi Arabia.

Ring Area
After the match, Cena says he is honored to be allowed to participate in tonight’s event. He thanks the Kingdom of Saudi Arabia for their hospitality.

Video
“The Best of Both Worlds” video for the upcoming co-branded PPVs.

Result: Cedric Alexander wins via pinfall after a Lumbar Check and retains his title
Time: 10:14

Match Thoughts
Very good match. Both men seemed extremely energetic for this match. They started quickly and never really let the pace fall. This had some very nice and exciting moves as well as more than a little bit of flying. The finish was great.

Match Thoughts
Good match. I don’t think the result was entirely a surprise, but the match was fun. The buildup to the finish felt like it dragged a little compared to most of the rest of the match, but it was still good.

Result: Jeff Hardy wins via pinfall after a Swanton Bomb and retains his title
Time: 6:10

Match Thoughts
Pretty good match. Nothing really wrong with it, but it felt kind of short and uneventful. Not a bad match though. And this was another one where the winner felt like a foregone conclusion based on what happened in the Superstar Shakeup.

Video
The social changes in Saudi Arabia are looked at.

Backstage
Mike Rome welcomes Chris Jericho. Jericho is happy to be here, and he’s happy to share the ring with 49 other superstars. Jericho also starts putting people on The List.

Match Thoughts
Pretty good match. The Usos built a little offense, but I think they could have done a lot more. If given more time, I think this match could have been great. With its short duaration, this ended up being a fairly dominant performance from the Bludgeon Brothers.

Result: Seth Rollins wins by leaping onto the ladder from the ropes and taking the title before FInn Balor
Time: 14:35

Match Thoughts
Good match. I liked the suddenness of the finish, and the action building up to it was good. I’m not surprised by the outcome, even though I was pulling for someone else to win. Half of the people (the SmackDown people) didn’t really even seem to have a chance to win, so it was really down to two men in my eyes. Despite that, I liked the match.

Ring Area
Mike Rome welcomes four prospects from recent tryouts in Saudi Arabia: Nassar, Hussein, Monsoour, and Fisal. As some of them speak, Ariya and Shawn Daivari interrupt and approach the ring. Ariya says none of the prospects are true athletes. The Daivari brothers are from the strongest nation in the world, Iran. Ariya shoves Fisal, so Fisal shoves Ariya. Shawn then gets beat up by the other prospects.

Match Thoughts
Very good match. Nothing was settled here, but it will certainly lead to a great final match between Styles and Nakamura. I liked the action, and despite one super obvious setup to get the referee in the way of a move, everything about this was well done. Ultimately this was a plot point within the larger story, but it was a good one.

Video
The Undertaker is a legend.

Result: The Undertaker wins after closing both Rusev and Aiden English in the casket
Time: 9:40

Match Thoughts
This was fun. It was more about spectacle and maybe a but of nostalgia more than anything else. Undertaker was methodical as Rusev tried to keep the pace up. I enjoyed this more for the moments and the reactions from Rusev than for the action itself.

Result: Brock Lesnar wins via escape when Reigns spears him through the cage and to the floor
Time: 9:13

Match Thoughts
This was about what I expected. It was pretty much nothing but big moves, kickouts, and a “controversial” finish. The finish was kind of fun, but it also doesn’t work terribly well. It makes it feel like a bad call on the ref’s part rather than an unfortunate result for one guy because he’s just too powerful. Or whatever. The match was fine for what it was.

Match Thoughts
This was fun. I don’t think it was the most exciting Rumble match ever, but I enjoyed it for the most part. LIke a lot of Rumbles, the order of the participants felt overly choreographed at times. I like to believe it’s random, but when Owens, Shane McMahon, Jericho, and even Big Cass are all stacked at the end to create some SmackDown drama, it pulls me out of my suspension of disbelief. I did like some of the surprises, though there weren’t very many surprise entrants. I also like that this wasn’t for any title shot, so it felt a little more open in regards to who realistically had a chance to win.

Ring Area
Vince McMahon and a representative from Saudi Arabia present Braun Strowman with a trophy and a championship belt.

Show Impressions
This was a long show, but it kept me mostly entertained. I liked a lot of the matches to varying degrees, but after everything was finished, it didn’t feel like this accomplished much of anything. No titles changed hands (not including the vacant RAW Tag Titles being won), and in the grand scheme of things it felt like this could have been just a glorified house show. A VERY glorified house show, but a house show nonetheless. I don’t feel like anything that happened here will have much of a bearing on ongoing story lines. It was a fun show though.

Match of the Night
IC Title Ladder Match
I think this might have been the most fun and memorable match for me. The Cruiserweight Title match was also very good. A lot of the other matches were good, but some of the finishes made it so I have a hard time picking them.

#Happy4thofJuly from us @wheresyourhq
Enjoy 30% Off with code "ind30" through July 4th Midnight PST
ðŸ”— https://t.co/XgJ7xz62BT