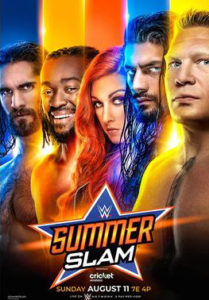 << Read the Recap & Review for the Summer Slam Kickoff show. <<

Intro Video
Tonight, we are SummerSlam.

Video
A look at the feud between Natalya and Becky Lynch.

Result: Becky Lynch wins via submission with Disarm Her
Time: 12:26

Match Thoughts
Good match. They went back and forth throughout the match, and though Natalya seemed to hit some of the bigger moves, neither woman looked to be in complete control during the match. They both traded submissions towards the end of the match (and both used their opponents finisher), and I enjoyed how the match progressed. This was a solid start to the show.

Backstage
Kayla Braxton welcomes Trish Stratus. Trish is ready or tonight. She’s going to show everyone that Charlotte could never walk in her boots. If Charlotte is the queen, then Trish is the queen of queens.

Video
A look at the match between Dolph Ziggler and Goldberg.

Result: Goldberg wins via pinfall after a jackhammer
Time: 1:47

Match Thoughts
Ziggler did two moves, then Goldberg did two moves. Michael Cole said vintage. This was boring and pointless.

Ring Area
After the match, Ziggler says Goldberg hits like a baby. Goldberg heads back to the ring. He hits Ziggler with another spear. Corey Graves says, “I don’t get it.”

Goldberg leaves, and Ziggler asks for the mic again. Ziggler rolls around the ring and calls Goldberg a laughing stock. Goldberg comes back out and hits another spear. Michael Cole chuckles at the fact that Ziggler can’t defend himself.

Match Thoughts
Good match. Ricochet started quickly and hit some breathtaking moves early in the match, but he also crashed in the corner and hurt his leg. Styles focused on Ricochet’s leg often after that, and it felt like Ricochet was a few steps slower with his injury. Ricochet still fought and showed heart, but his leg and the multiple distractions from Gallows and Anderson helped Styles dominate a large portion of this match. There were some really fun sequences here, and I thoroughly enjoyed the finish. This was a good match all around with fun wrestling and a solid story.

Ring Area
After the match, The OC beat up Ricochet a little more before leaving.

Backstage
The Street Profits are excited to be at their first SummerSlam. As Dawkins shoots his shot for Nikki Cross, Ric Flair walks up. There are lots of “woos.”

Result: Bayley wins via pinfall after a Bayley to Belly from the second rope
Time: 10:02

Match Thoughts
Good match. Moon was more aggressive at first, but that pushed Bayley to be more aggressive as the match went on. Both women were evenly matched, and though the finish wasn’t necessarily a surprise, I could have seen the match go either way.

Video
Buildup for the match between Shane McMahon and Kevin Owens.

Result: Kevin Owens wins via pinfall after a stunner (and a low blow)
Time: 9:22

Match Thoughts
This was fun. The addition of Elias as the ringside enforcer made this match more about shenanigans than wrestling, and that’s fine. It did feel good when Owens finally got his hands on Shane. Now hopefully Shane can go away for a while.

Video
A look at the attacks on Roman Reigns and the revelation that Rowan might be responsible.

Match Thoughts
Very good match. This was a lot better than I expected it to be. They were given a lot of time to develop the match, and that helped a lot. Trish started by countering a lot of Charlotte’s attempts at moves, and though you could kind of see Charlotte helping Trish, it was a good start. Then there was a moment when Charlotte took over, and that’s when the match really started getting good. Trish has to fight and struggle for every bot of offense she got, and she was able to frustrate Charlotte on numerous occasions. There were a number of very good near falls late in the match, and I got more invested as the match went along.

Video
A commercial for WWE 2K20.

Video
A look at the buildup for the WWE Title Match.

Match Thoughts
I liked the match, but the finish was unfortunate. It was unclear exactly what happened at first (though the reason for the finish was clear). Up to that point I was enjoying the match. It was maybe a little slower than I expected it to be, but it wasn’t bad. The energy and anger mostly came at the end though, and I kind of thought there would be more anger from Kofi right from the start. The way the match ended practically assures a rematch though, so maybe the next match will be different.

Video
A look at how Finn Balor came to face The Fiend.

Result: The Fiend wins via pinfall with the Mandible Claw
Time: 3:29

Match Thoughts
I really enjoyed this. It was pure spectacle and pro wrestling at its showy limits, and it was a lot of fun. Bray Wyatt was completely in character, and Finn Balor was great as what was pretty much just a victim. Balor fought back a little, but the expressions on Balor’s face completely sold what Wyatt was trying to put across as The Fiend. I am very much looking forward to what comes next for The Fiend.

Video
A look at the buildup for the Universal Title Match.

Match Thoughts
Very good match. Like most Lesnar matches, the first few minutes had gigantic moves that could have reasonably ended the match. Both men hit their finishers, but the match continued. And unlike most Lesnar matches, this match lasted a decent amount of time. Rollins had counters for a lot of Lesnar’s attacks, but Lesnar also connected with a ton of his usual moves. Rollins absorbed a tremendous amount of punishment while dealing some damage of his own from time to time. Rollins was looking for only the biggest moves in his arsenal, and he hit them with more frequency as the match went on. This was fun. I don’t know that it was worth using the Money in the Bank to put the title back on Lesnar just so we could have this match, but I did enjoy what I saw tonight.

Show Impressions
I liked the show. I don’t think anything was necessarily super spectacular, but I came away with a good feeling when the night was finally over. There were some things I didn’t care for which is always going to happen, and there were a fair number of average matches, but there was also some really good stuff tonight.

I liked the main event, Ricochet vs Styles, and Charlotte vs Stratus he most as far as matches go. The segment with The Fiend was also highly entertaining. Overall, I give this SummerSlam a thumbs up.

Match of the Night
Seth Rollins vs Brock Lesnar
Good stuff, but now I really hope they move on and away from Lesnar in the Universal Title picture.